In one of my previous articles I briefly mentioned about the global distribution of IQ level by country. Aside from European-whites, Eastern Asians also have exceptionally high IQ level on average.

The Chinese, with a population of 1.3 billion (91% Han Chinese), have a very high IQ average of 105. But little is known for the IQ level in different regions of China, whereas geographically and demographically it is simply too vast to ignore the regional discrepancy within the country itself. After an amateur scavenger hunt on the internet I actually did find some Chinese source about the IQ geography in China.

The data I found came from a website that offers self IQ tests for the Chinese netizens. Information such as age, geographical location were collected for the correlation purpose for the test result. The original statistics could be found here (in Chinese). I have constructed a series of simple diagrams for the IQ level by province in China (with the amount of participants in each province), as follows:

IQ by province in China (excluding Taiwan, Hong Kong and Macau) typo: Tianjian should be Tianjin (mistake in excel) 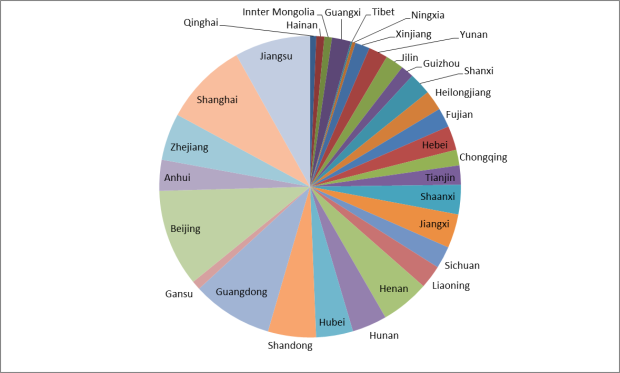 Number of participants by province (in total 63636)

There are 63,636 participants who took the IQ test on this website from all 31 provinces in mainland China. The mean IQ level of all participants is 106. This is more or less close to the figure given in Lynn’s IQ and Wealth of Nations. Considering the skewed effect of having more participants from regions with apparently higher IQ (e.g. Beijing, Shanghai, etc.), the average IQ level from the test might be slightly deviated from the actual average IQ level of China. Nevertheless, it could still give us a general idea of the IQ geography in China.

There’s a lot to be drawn from the IQ level by province data in China. From a simple glimpse of this IQ map of China, it is evident that the highest IQ level concentrates in the Central Eastern coast of China (around Shanghai, traditionally called Jiangnan). This region in China is famous for its beautiful nature, nature resources, and most importantly, talented intellectuals and traders. This region also happens to be the locomotive of China’s soaring economy. Interestingly, 5 out of 8 Chinese Nobel prize winners (except for the lame peace award which literally means nothing but a leftist scam) come from this particular region of China.

Besides Jiangnan region, high IQ level was also observed in economic strongholds such as Beijing and Guangdong. Those regions surely attracts more smart people than elsewhere in China.

The exceptionally high IQ level of Gansu, a northwestern underdeveloped province in China, could result from the skewed sampling in the study (merely 612 participants claimed to be from Gansu). It is possible that those participants might misrepresent the actual IQ level in Gansu (given that most of Gansu still struggles from poverty and environmental hardship).

Central-south China has a relatively high IQ level (including Hunan, the province I am from). This region is known for its fertile land and mild climate. This region is considered the core of China proper with extensive historical sedimentation that nurtures the rise of Chinese civilization. (off the topic: Hunan is know for its ferocious political and military figures in modern China!).

The relatively low IQ level regions in China largely overlap with the geographical region that has high minority populations with harsh geographical and climatic environment. It is unclear, however, about the role of ethnicity profiles in this observation. This study contains no data about the ethnicity of the participants. Hence, it is inconclusive to say that minorities have a lower IQ tendency compared to Han Chinese in this study, though it is probably the case in reality (from other parameters to judge high IQ level such as level of agricultural productivity, civilization etc).

Overall, this data at least shows us a general impression on the IQ level in different provinces of China. Hopefully there are more studies available for such topic in the future.

This is the first guest article in my blog. Credit goes to “spandrell”, a white friend of mine. I got the honor to publish his original work in my blog to share with everyone. Enjoy!

There’s this question I’ve wondered about forever. We are all told humans are individuals who think independently and are totally creative and unique.

But I grew up and read, travelled, went to museums. And I thought: if all humans are individuals with individual souls and fully capable or whatever,

Why are cultures so uniform? And why do they vary so much? Why do Egyptians cut clitorises? Why do Chinese worship money? Why do Indians worship bullcrap? Why do Moroccans drink mint-tea? Etc.

The answer to cultural diversity between cultures, uniformity inside them; and to the world’s utter dysfunction in the postmodern age is,

Most people are stupid. As individuals, most people are pretty dumb. I won’t show the Bell curves here. But it’s pretty well known. Or it should.

Well dumb people can’t do anything by themselves. They have to be taught. Repeatedly. Drilled mercilessly on their brains until they reach basic competence.

And that’s what most cultures do: the same fucking thing over and over again for generations. Attach some mystical value to the whole thing (some God fucked a sheep and its son invented the technique), some ancestor worship (they came up with doing that on the first place), and over time you have a people who have become very proficient in, say, falcon hunting, horse-archery, cow worship, temple building, oil painting, whatever.

Of course this works at all levels: nation-level, tribe-level, caste-level,  art school level. It’s the only way to really acquire proficiency at anything, to practice forever under people who have practiced forever. Indians took it too far and even force you to marry only other people who have practice the same thing forever. The average human can only do something with an acceptable level of proficiency if he does that and ONLY that for, well, ever. Over time come marginal changes, little evolutionary changes which cause what we call cultural change, i.e. that which we write on history books, or how we arrange museum expositions. Of course cultures have different degrees of change, some are quite fast (post Black-death Europe) some are pretty much static (Eskimos). Different variables influence that rate of change. I remember seeing in the Louvre museum those cylinder seals the ancient Middle-easterners used to decorate their clay tablets. They used those for over 3000 years!  A damn cylinder carved as to print a relief in clay when you turn it forward. I’ m sure it was pretty neat when one Mesopotamian relief artist got fed up with carving every single clay tablet once by one, and invented the thing back in 3500BC. I bet all other artisans were blown away. But when Alexander’s armies 3000 years later went through the area the local artisans were still busy carving their cylinders. Now that’s what I call tradition. 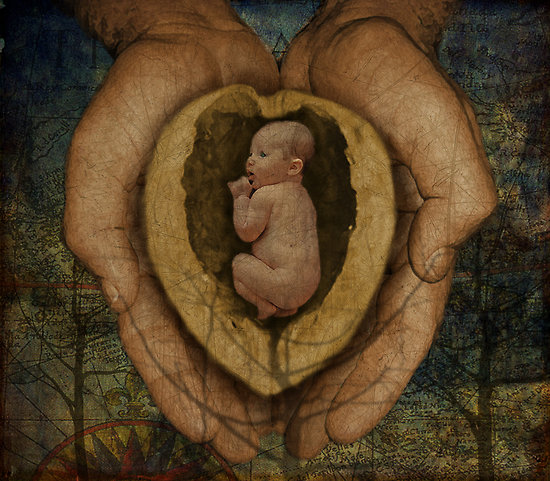 My hunch is that IQ is the defining factor in the rate of cultural change. Some people just can’t really come up with new stuff. Say Papuans, who have been probably decorating their penis sheaths forever.

Meanwhile Europe was always busy destroying everything the previous generation had left over.

Yet again East Asians are pretty smart, yet aren’t as unfilial as Europeans. The thing is cultural change is not an unmitigated good: it destroys the proficiency-by-drilling thing, i.e. if you stop drilling you stop making good stuff. Japanese artisanship is a good example of what boring practice is capable of. Of course Europeans invented machines so there’s little need for practice-based artisanship, but that has caused widespread misery for those who need to be drilled to make anything useful, not to mention awkwardness for the older generations who can’t keep up with the new stuff.

Well that awkwardness is what Asians will NOT stand. Old people are in charge there, and young people accept the need to wait to be in charge. And when they are in charge they will make sure that the cycle is not broken and they get the respect they waited for so damn long. Cultural change in a sense is a form of disrespect over what was left over by forebears, and breaks the drill cycle (cultural transmission). I’m sure the old man wouldn’t be happy if its son decides to make fishing nets in a different way. Or stop making nets altogether. If you allow kids to stop making nets you may end up without the knowledge to make them and force the whole hamlet to starvation.

Breaking the drill cycle brings good and bad things. Good is it creates progress! You stop teaching something, people stop being able to do it. So you need to come up with something else. Better. Voila, steam machine. Voila, airplanes. Voila, penicilin. Voila, smartphones. It’s pretty cool and we all owe a lot to it.

The bad thing is that it causes the vast majority of the people (those unable to come up with things, those who NEED the drilling to be able to do anything) to become miserable inefficient workbots. The solution is more effective drilling (what we used to call ‘education’) to make them proficient at whatever productive industry there is at the moment. It worked while 1. The rate of change was pretty much generational, i.e. you could expect to use the skills learned in school when you become an adult; 2. Schools drilled kids with merciless efficiency and brutality. So kids actually learned 1. Manners 2. A trade.

But now? We have become so enamored with ‘progress’ (cultural change) that we came up with the fantastic idea that if you stop ALL drilling at all, and just teach instead some abstract nonsense about queer history and democratic values, people will come up with new things all the time! Ain’t that awesome? So there’s some stupid idea out there that the innovation rate is not enough (tell that to Mesopotamians which decorated their houses the same way for 3000 years), so we need to come up with even more new stuff, but people just can’t keep up. Why could that be? Real Answer: people just aren’t that smart. Mainstream answer: Kids get bored at school with drilling, so we need to stop drilling and they’ll become super creative!

This has been done since around the 70s, with the predictable results of a complete breakdown of traditional manners and culture, making dumb people (= left half of the Bell Curve) totally unproductive, ultimately becoming junkie welfare addicts. Smart people still somehow come up with enough things to keep the economy going, but demographics predicts it can’t last much longer. The 3rd worlders we are importing to replace our useless new underclass are even dumber than the natives, and we aren’t educating them either, so we are just creating a doubled up junkie welfare addict plebeian mass. And don’t get me started with Jihad.

So European obsession with change (‘progress’)  made it deny the most basic human way of cultural transmission, that is: focused drilling. Asians are still pretty much for it (too much, as they drill also their smart kids, which become boring workbots), so they’ll probably keep some level of civilization while Europe strives to get its shit together. If it ever does.